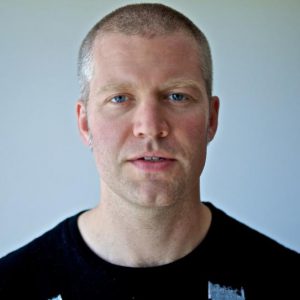 Scott Fitzgerald is an artist and educator whose work examines the interdependence of culture and technology. He’s a Professor and co-Director of the Integrated Digital Media program at NYU Tandon and a PhD student in the Department of Media Study at University at Buffalo. His research investigates unseen power relations expressed through networked devices. Scott has a Master’s from New York University’s Interactive Telecommunications Program where he studied interactive video art and physical computing. His work has been exhibited and installed around the globe, including a permanent site-specific work at the University of Oslo and temporary public work in New York City’s Times Square. From 2007-2010, Scott was a researcher with the audio art group Locus Sonus, working with sound in built and imagined environments. He regularly runs workshops on using technology in the arts and was the head of documentation for the open source Arduino platform and was founding head of the Interactive Media program at New York University Abu Dhabi.