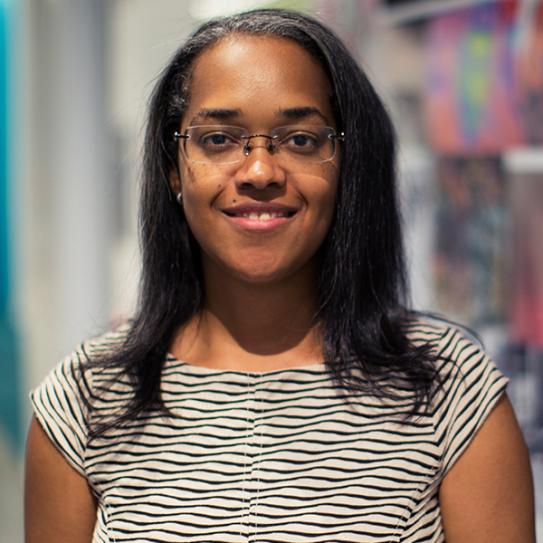 De Angela L. Duff is currently an Industry Professor in Integrated Digital Media (IDM) at NYU Tandon & an Associate Vice Provost at New York University (NYU). She was formerly the Co-Director of Integrated Digital Media from 2013-2018. Teaching in higher education since 1999, she is very passionate about educating students at the intersection of design, art and technology. She was acknowledged for this passion by being awarded the NYU Tandon School of Engineering’s 2018 Distinguished Teaching Award. Over the last 15 years (and counting), one of her other passions is creating, developing and evaluating higher education curriculum in the emerging media and technology space, first at The University of the Arts in Philadelphia, and subsequently at Spelman College and New York University. She has also been in higher education administration since 2009.

A native of Eutaw, Alabama, De Angela’s mission is to share her passion for music, photography, technology, creativity, and productivity with others. She curates music symposia and produces, co-hosts, and edits the Prince & Prince-related podcasts for Grown Folks Music. She has organized the following symposia: Prince BATDANCE symposium (2019) at Spelman and Prince EYE NO: Lovesexy (2018) and Betty Davis They Say I’m Different (2018), both at NYU Tandon. She also co-produced the Peach + Black panel (2017) for the 30th anniversary of Prince’s Sign ‘O’ The Times also at NYU Tandon. She is currently co-producing her next Prince symposium, DM40/GB30, for the 40th anniversary of Dirty Mind and the 30th anniversary of Graffiti Bridge (2020) at NYU, alongside the NYU Institute for African American Affairs and the Center for Black Visual Culture.

De Angela speaks at numerous conferences internationally. She will be speaking on two panels at the upcoming Black Portraiture[s] V conference at NYU. She has spoken at the Prince from MPLS symposium, Purple Reign: An interdisciplinary conference on the life and legacy of Prince, EYEO, Black Portraiture[s] IV, III, II & II: Revisited, NYC’s Creative Tech Week & Raising The Bar, AIGA’s Social Studies and Massaging Media 2 Conferences, and HOW’s Annual Design Conference. She has judged Eyebeam’s Trust Residency, Tribeca Film Institute’s New Media Fund, and HOW’s interactive design competition. Her work has been featured in publications such as HOW and Print magazines, and the books, Now Loading and www.animation: Animation Design for the World Wide Web. She has served on Philadelphia Mayor Michael Nutter’s committee to re-brand Philadelphia and participated in the Free Library of Philadelphia’s Website Brainstorming Charette.

De Angela has a lot of academic and industry experience at the intersection of design, art, and technology. Prior to returning to NYU in 2019, she was the Co-Director of Spelman’s Innovation Lab from 2018-2019, and, prior to joining Spelman, the Co-Director of the undergraduate and graduate programs in Integrated Digital Media (IDM) and an Industry Associate Professor at NYU Tandon School of Engineering in Brooklyn from 2013-2018. Prior to joining NYU Tandon, De Angela was the Program Director and an Associate Professor of Design, Art & Technology (formerly Multimedia) and Web Development & Interaction Design within the College of Art, Media & Design, as well as an Interim Co-Director of the School of Design at The University of the Arts (UArts) in Philadelphia, PA. Prior to UArts, she was an Art Director for Nettmedia, an NYC interactive design firm. Notable Projects included art direction and lead design of BowieNet version 2.0, davidbowie.com, as well as the design and development of a myriad of websites for the likes of The Roots, Britney Spears, Alicia Keys, and many, many others.